STEP #1: FOOD AS AN ACTOR IN A CROSS-CULTURAL MAPPING OF AGEING. "Ageing Foods" builds on the data recollected during the previous project "Cross-cultural analysis of ageing" advanced during the EMAPS workshop 2012 "Ageing Places". During the time of the workshop the term "ageing" was queried in each of the dominant languages of localized Google search engines of twenty-three countries members of the European Union. Namely: United Kingdom, Czech Republic, Romania, France, Estonia, Finland, Germany, Slovakia, Italy,Portugal, Slovenia, Belgium, Ireland, Poland, The Netherlands, Spain, Hungary, Turkey, Denmark, Sweden, Malta, Bulgaria and Greece. The first hundred results outputted by each search engine (set to return only websites and documents from the countries in question) were used to identify and synthesize the top ten unique issues per country. For example: the website of a foundation dedicated to raise awareness for the rights of older women would be synthesized as “ aging and women’s rights awareness”. As the aim was to identify unique issues, if the same issue appeared more than once (ex: two consecutive websites addressing the rights of older women) the researcher was indicated to continue to the following results until she/he would find a new one. During the process each of the researchers were logged out of Google, and turned of Web history and personalization. The preliminary output of this phase of the project were twenty-three lists containing the top ten unique issues per country using Google’s search engine popularity rankings as criteria. Now, when further looking a the issues identified in this first stage, in the totality of the 230 issues recollected the topic of food was mentioned on 16 of them-- while other topics remained mainly heterogeneous, food stood up as a consistency. The following table contains the description and links that correspond to these 16 food-realted results gathered during the EMAPS workshop. Figure 1. Table. Contains the 16 food-related results within the larger cross-cultural query for "ageing". The paring of food with the term anti-ageing was frequent in this subset.

The coupling of food with the prevention or slowing down of the process of ageing was frequent in the past set of results, specifically the term anti-ageing food made an appearance more than once. Taking this into account, we decided to perform a new series of queries using the term "anti-ageing food" and its equivalents in the localized Google search engines (customizing the results to only show pages that are registered in the country in question). The searches already been performed are in bold font: United Kingdom, Czech Republic, Romania, France, Estonia, Findland, Germany, Slovakia, Italy,Portugal, Slovenia, Belgium, Ireland, Poland, The Netherlands, Spain, Hungary, Turkey, Denmark, Sweden, Malta, Bulgaria and Greece. The results outputted by the search engines for the query "anti-ageing food" had mainly two different formats. On the one hand, the results were websites (such a online magazine or health blogs) containing a list of food that were recommended to the reader on the basis of their anti-ageing properties. For example, a list would contain products such as tomatoes, blueberries, salmon and carrots. Usually, each recommend food would be accompanied by an explanation of its beneficial qualities, for example, about the anti-oxidant properties of tomatoes and their benefits on the human body. In this type of result the individual name of the food product was the most relevant element. On the other hand, it was also common to find listing that focused on the general nutrients and compounds credited with slowingdown down or preventing ageing and which did not focused on the food itself. For example, in this type of listing the most relevant element were concepts such as antioxidants, Vitamin C and Iron. We decided to focus on the first set of results as they came across as more specific and diverse and potentially point at local differences. From each set of results outputted by country we selected the top five food listings in which anti-ageing foods were recommended to the reader. We read each of the listings and manually transcribed into an spreadsheet (see attachments) the products or food that were recommended. It was very common that specific types of foods were mentioned in more than once across the five listings included per country. For example, "Salmon" could be recommended in three of the five top anti-ageing listings for a specific country. To further compile the five lists per country we used the tool "Raw Text to Tag Cloud Engine" which takes raw text, counts the words and returns an ordered, unordered or alphabetically ordered tag-cloud. This allowed us to compile the a set of unique country listings in which the order of the elements corresponds to the frequency a item was mentioned. For example, if an avocado appeared in each one of the five google results for itally, then it would be granted the first place on the list. The final result of this step were 11 "anti-ageing shopping lists" (see attachment). Then, we inputed the 11 anti-ageing shopping lists into the "Triangulation tool" which allows the user to enter two or more lists of URLs or other items to discover commonalities among them. This allowed us to vizualialized (using a color-coded system) a categorization of elements that were present in all lists, in ten lists, in nine lists and so on (figure 2) 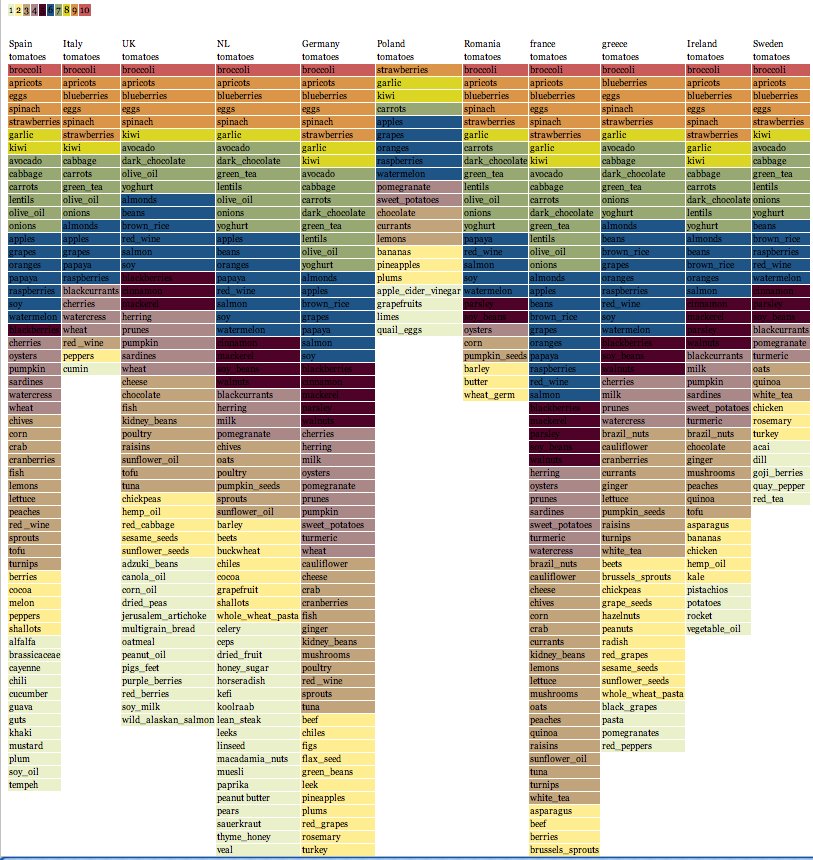 Figure 2. Cross-cultural shopping lists. The term "anti-ageing food" was queried in different localized Google search engines. The top five lists of anti-ageing foods suggested to the reader were later compiled into "national" shopping lists. Later this lists were triangulated. The image above corresponds to the reorganization of the lists according to the similarities and differences of items. For example, items that were present in all 11 lists appeared at the top with the color white, items that were in 10 out of 11 lists are assigned the color red. The color coding can be seen on the upper left corner of the table. Using this organization and visualization principle rendered two sides of the spectrum: a top part which visualizes the elements that stand out because they are common to all lists or most of the lists. For example: tomatoes were the only type of food recommend in all eleven search engines and broccoli was recommended in all list with the exception of Poland. On the other hand, the lowers part of the list highlights those elements, when it was the case, that were unique to each one of the countries. For example: the UK search engine was the only one to recommend "pigs feet" as an anti-aeging food while Sweden was the only one to recommend "red tea".

The final step in this project was to further inquire into the cultural relationships of anti-ageing and food. Using as directions the results taken into account in the Step 1 and 2 (where menus, anti-aging cooking courses, ingredients also pointed towards the preparation of anti-ageing dishes) we queried the terms "anti-ageing recipes" or its equivalents in the 11 search engines. From the results outputted we manually extracted the top result per country in which the preparation of an anti-ageing dish (in the format of a recipe which included ingredients and interactions). We compiled this results into an anti-ageing cookbook that combines recipes from 11 search engines. 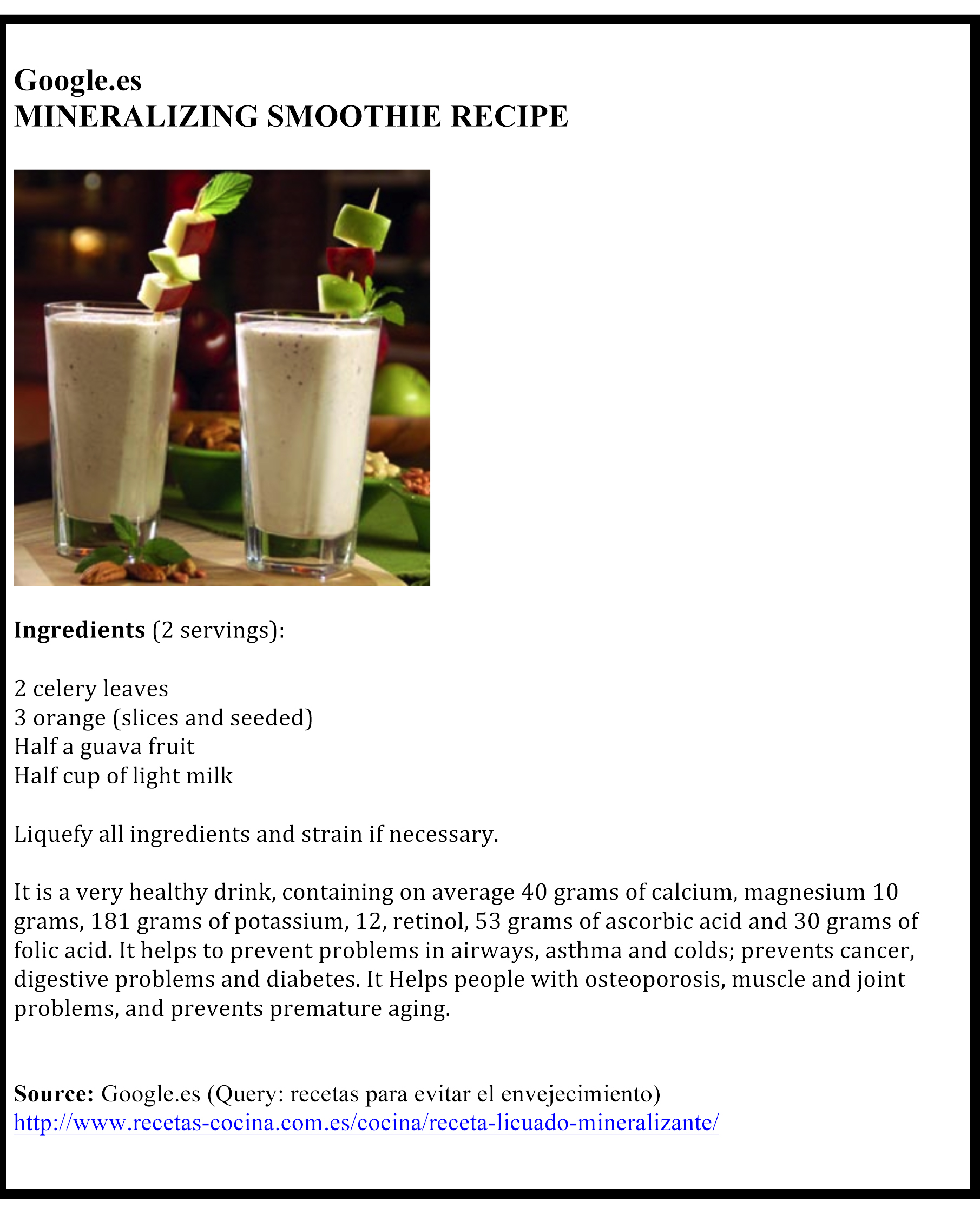 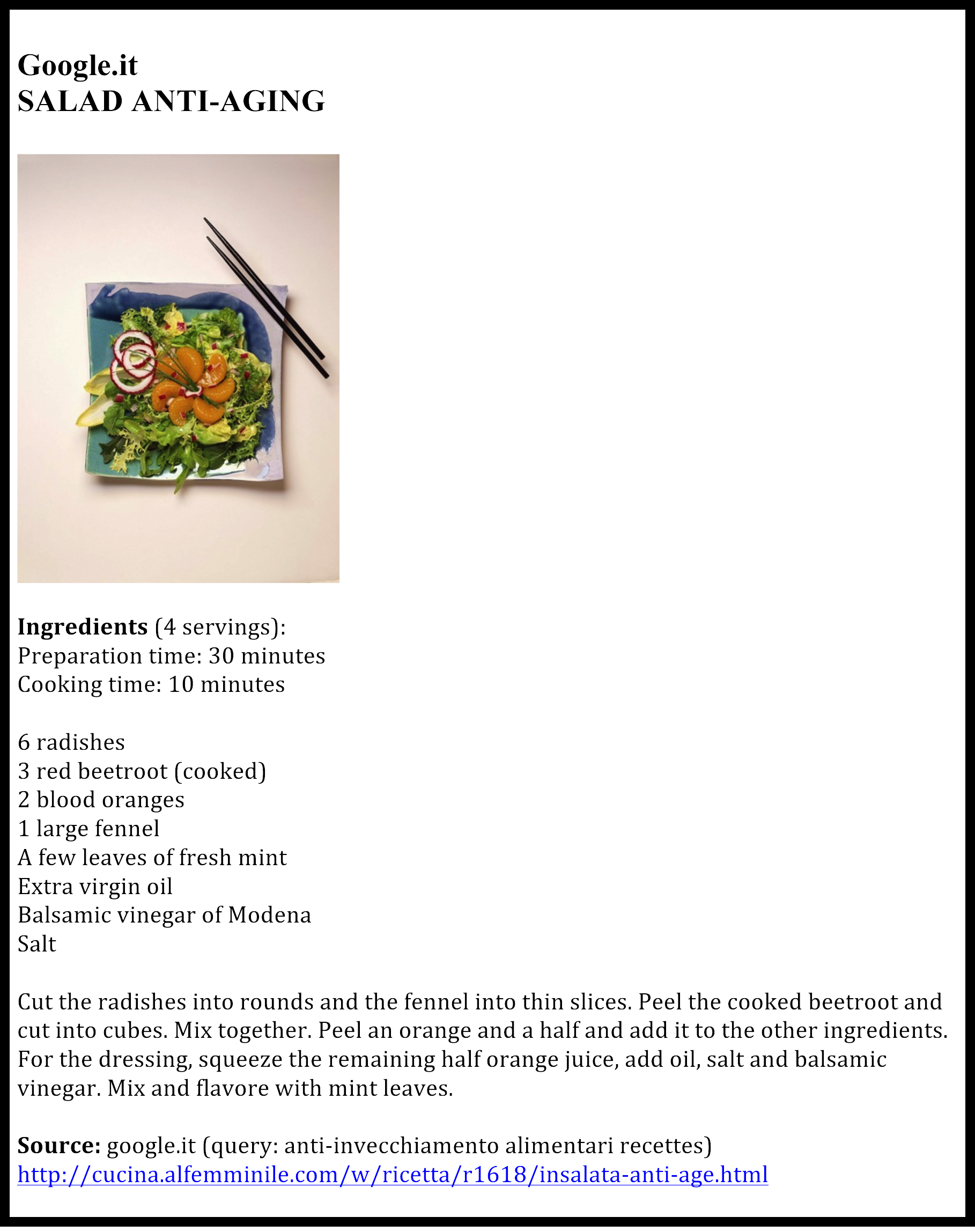 Figure 3. Screenshots. The terms "anti-ageing recipes" was queried in localized google search engines. The top result that appeared in the format of an actual cooking recipe was translated and compiled. Recipes correspond to Google.es and Google.it.