Display of Urban Health Lifestyles on Instagram - What is considered healthy where?

The original project idea was to study food choices on secondary social media. Our reseach interest was to find out whether healthy food choices are shown and whether commercial interests can be located. What health choices are shown there? Are these private, commercial or do they show issue-based interests? And can any influences or patterns be found? Our focus was on display of food choices, so our first approach was to study the hitherto understudied platform Pinterest. The limitations of the Pinterest API, however, forced us to focus our research on another important image platform. We chose to emphasize the perception of healthiness on Instagram only and to characterize the kind of health dispayed there. Instagram is highly relevant, also because 20% of global internet users between ages 16-64 have an Instagram account (expandedramblings.com/index.php/important-instagram-stats).

The Instagram Scraper proved to be one of our main tools to get the data from. To narrow down our research, we chose to pay attention to different locations and compare them. The general topic of this years Summer School being secondary social media, led us to the idea of emphasizing secondary cities. The choice of secondary cities was subsequently done on basis of language expertises among the team members and Wikipedias list of secondary cities. The cities that were chosen to do research on are: Rotterdam, Utrecht, Denver, Graz and Aarhus and Milan. We thought it would be good to include the two Dutch cities, Rotterdam and Utrecht, to see whether there are interesting findings when it comes to one country as well as comparing the countries together as a whole.

The Instagram Scraper allowed us to get data from a specific geographical location. The coordinates of the cities were retrieved by using the Geo Coordinates Tool of the Harvard University. We set the radius to 5.000 metres, the maximum amount of posts was 10.000 for each city. In the end we had 60.000 posts collected. Instagram videos were included in the dataset, but were not used in the analysis itself (excluded from dataset).

Netlytic also allowed us to scrape data from a specific location, however it took too much time to reach a thousand posts per city. We also had some problems with the geolocation when using the Instagram Scraper; Milan for example (another city of one of the groupmembers) gave us a lot of duplicates. Therefore, we had to exclude this city from our analysis after trying multiple times.

We visualized the data for each city in Gephi. We deleted the city- and countrynames (and frequently used variations), as it doesnt give us much information on whats going on in the city. In order to visualize the look of health, we used ImagePlot.

The frequency lists showed us how popular health related hashtags or posts are when it comes to using Instagram and what is posted on Instagram in general. Even more interesting for our research is to see what exactly is being posted about health for each of the cities. It appeared that #eatclean is the most popular food trend at the moment for Aarhus, Denver and Graz. In Utrecht and Rotterdam #vegan is most popular.

The following figure shows an overall display of the the top health related hashtags for each city: 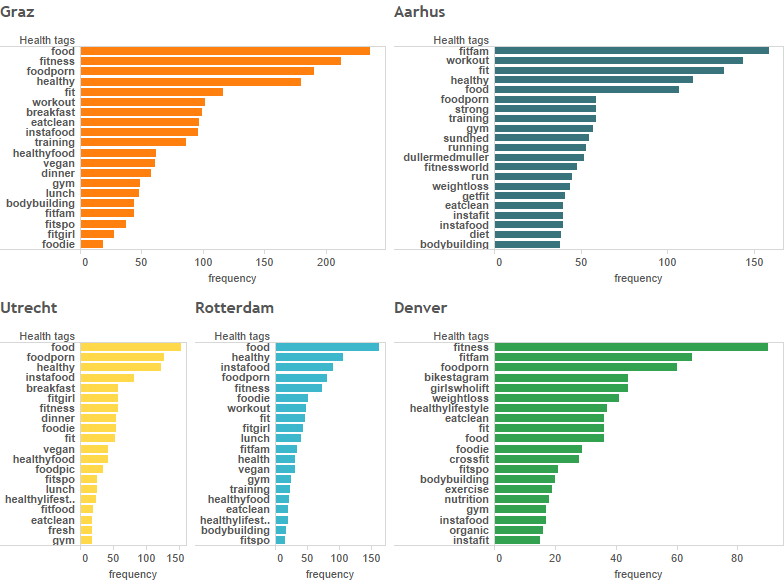 In Gephi we could see different clusters of health related posts and get a feeling of what is considered healthy in a specific city when we looked closer at the health cluster. To give an example, the following is a display of the health cluster of Utrecht - this is what weve done for all of the cities. 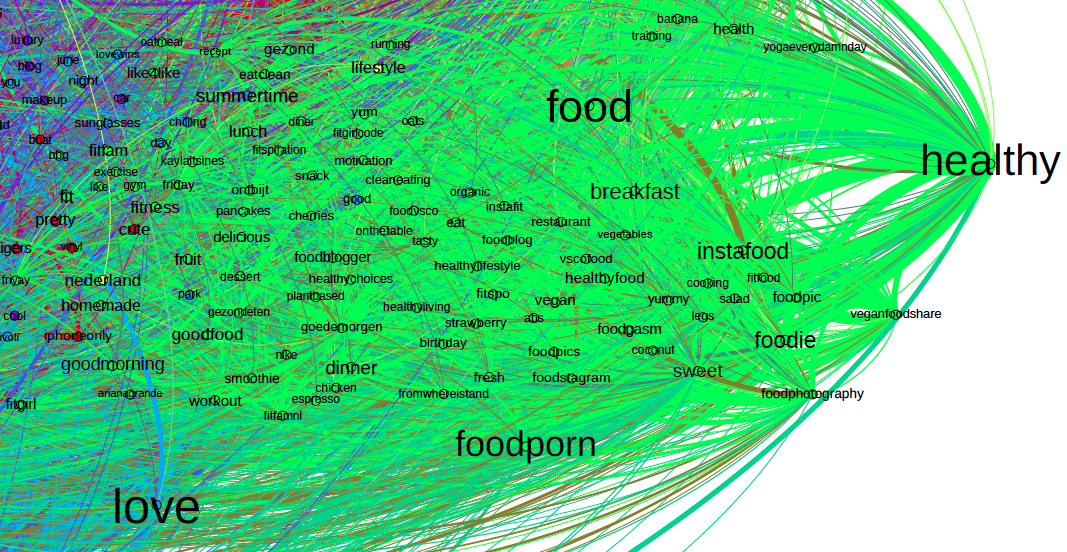 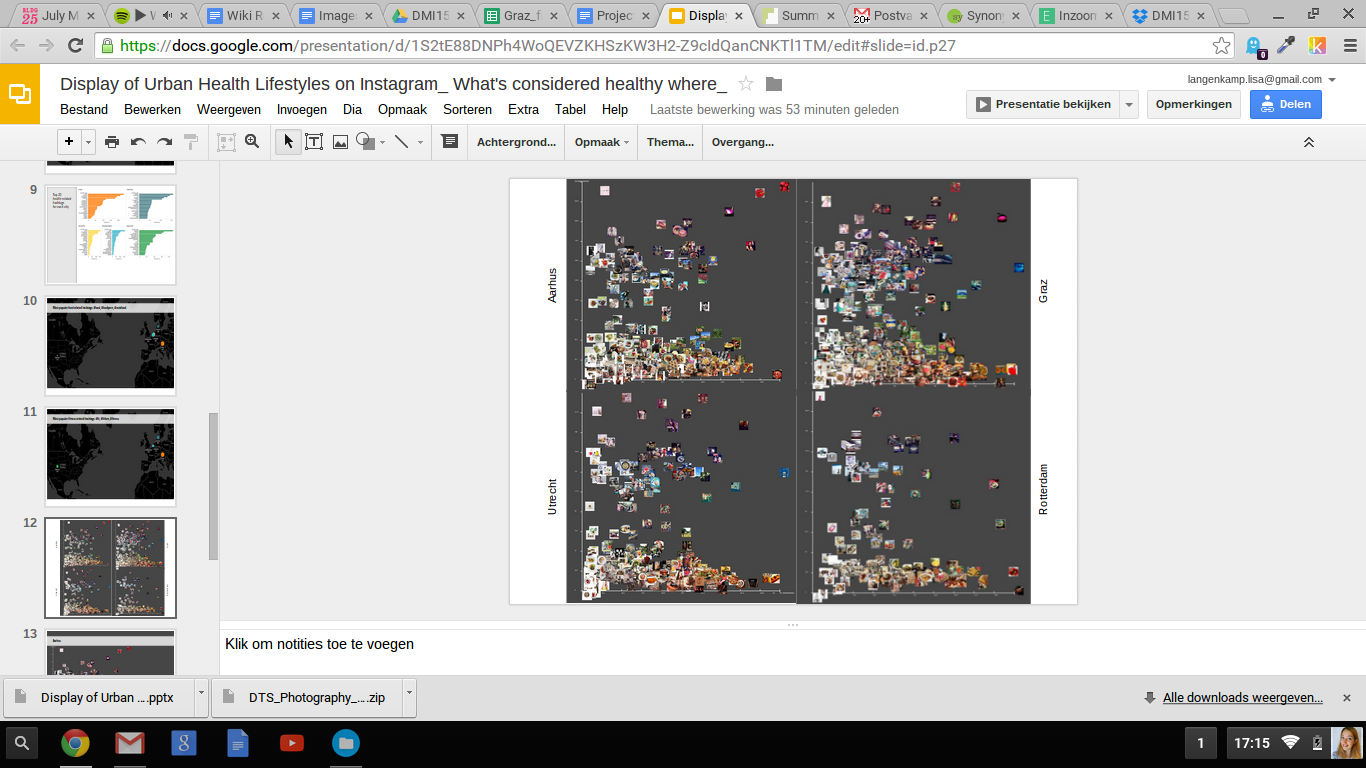 Without necessarily making the scraper look for keywords that concern health, health clusters were automatically formed while putting the output in Gephi; we only used Instagram posts based on the location. That on itself is already a result and might emphasize on a general basis that Instagram is the right place to see how much people are concerned with their health. Also it seemed that some cities are more focussed on sport/physical oriented health lifestyle (e.g. Aarhus, Denver) instead of food oriented health lifestyle (Graz, Utrecht, Rotterdam) (fig. 2). This gives the impression that there are different interpretations of health among these cities. Regarding health in respect to food movements we found a distinction between utrecht and Rotterdam (vegan)and all the other analyzed cities (eatclean) (tab. 1). This indicates related, but still distinct perception regarding food habits.

Unfortunately we couldnt use the Milan dataset because of duplicates. Besides that, it was remarkable to see that the Instagram posts from Milan most of the times didnt include hashtags, whereas it was more of an execption for other cities when hashtags werent included in the post.

Whereas our research consists of a set time, it might be interesting to do research on health related Instagram posts over time to see where new health movements occur and how they spread over the years. Furthermore, the ImagePlot tool can be useful to expose the way health has been portrayed by Instagram users over time and what techniques and ways of photographing health lifestyle have become popular.

With the scraper tool developed for Pinterest in the future it would be interesting to compare Instagram and Pinterest regarding the way that people use these platforms and to find out how displays of health lifestyles differ, e.g. through the influence of commercial interests.