Describe how visual communication about climate change adopts a platform vernacular on Instagram.

The research design was conducted from visual co-tag network analysis to visual content analysis, to this purpose we followed the protocol:

1. To better visualise the co-tag network (gdf. file), in Gephi, we removed the two principal nodes (climatechange and globalwarming) and excluded all nodes with 1 to 40 mentions.

2. We use modularity to cluster correlated tags, a total of 16 clusters:

3. Based on the principal nodes of each cluster (the one with more mentions), we queried the Instagram metadata csv. file, and extracted the URLs of the images, using downthemall to collect images per cluster. 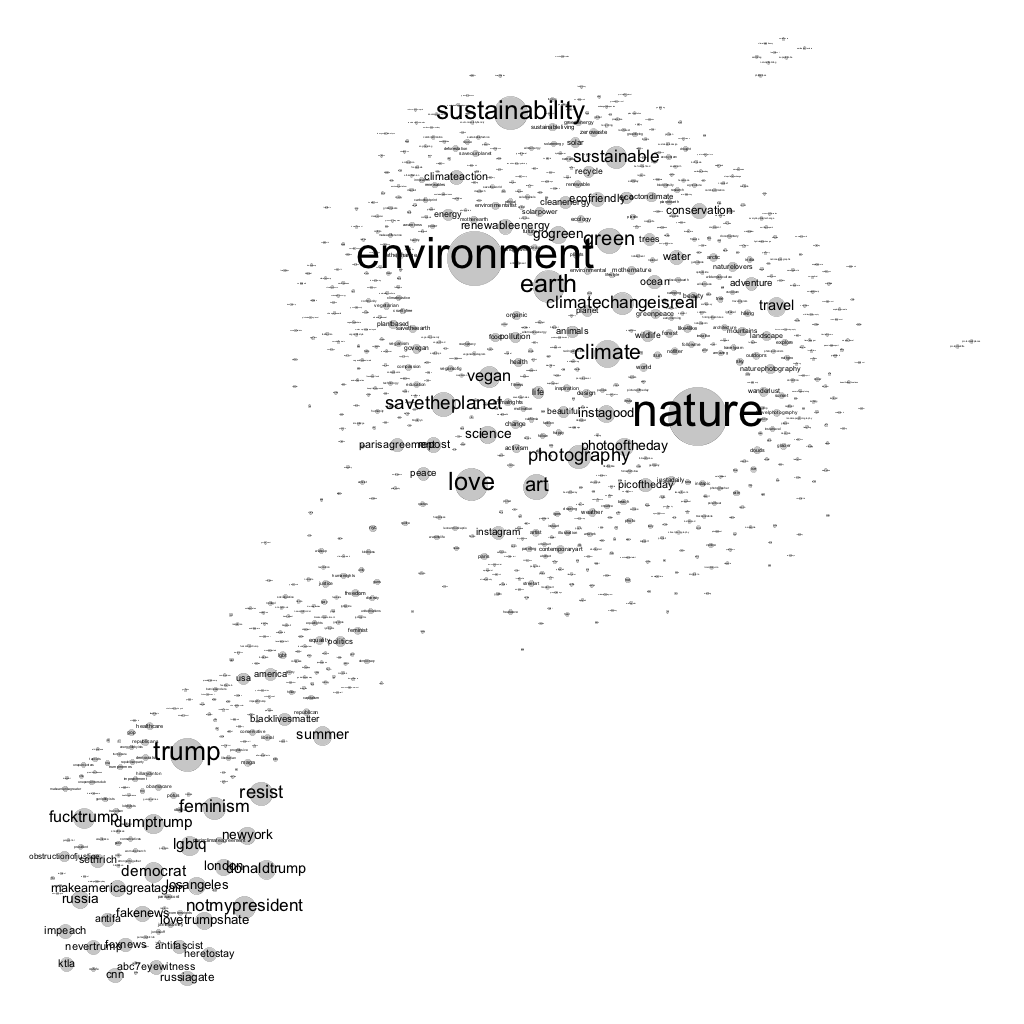 The main cluster present issues directly related to climate change, but in a broad perspective or more familiar view on the theme, for instance: sustainability, conservation, savetheplanet. We also see very particular tags such as art, photography, vegan and love, which may disclose a different visual culture of climate change in comparison with the tags environment and nature. In the second cluster, the US president is the most co-mentioned tag, however what we actually see here is a resistance community. Critiques on Trump appears together with representative social movements: Feminism and LGBT. In checking the node resist we see the tag is not only significant in this cluster but in the the whole network.

Analyzing images according to engagement

What first comes to mind when looking at the general top ten engaged posts is, that the listing contains professional or semi-professional pictures only. When only looking at the images without knowing the captions, they are not related to climate change at first sight but showing very aesthetically pictured nature, culture and places that are endangered by the impacts of climate change. None of these pictures are using from Instagram provided filters but are edited. Due to the professionality of their origin, it can be assumed that they were taken with professional camera gear and then edited with Lightroom, Photoshop or similar tools. 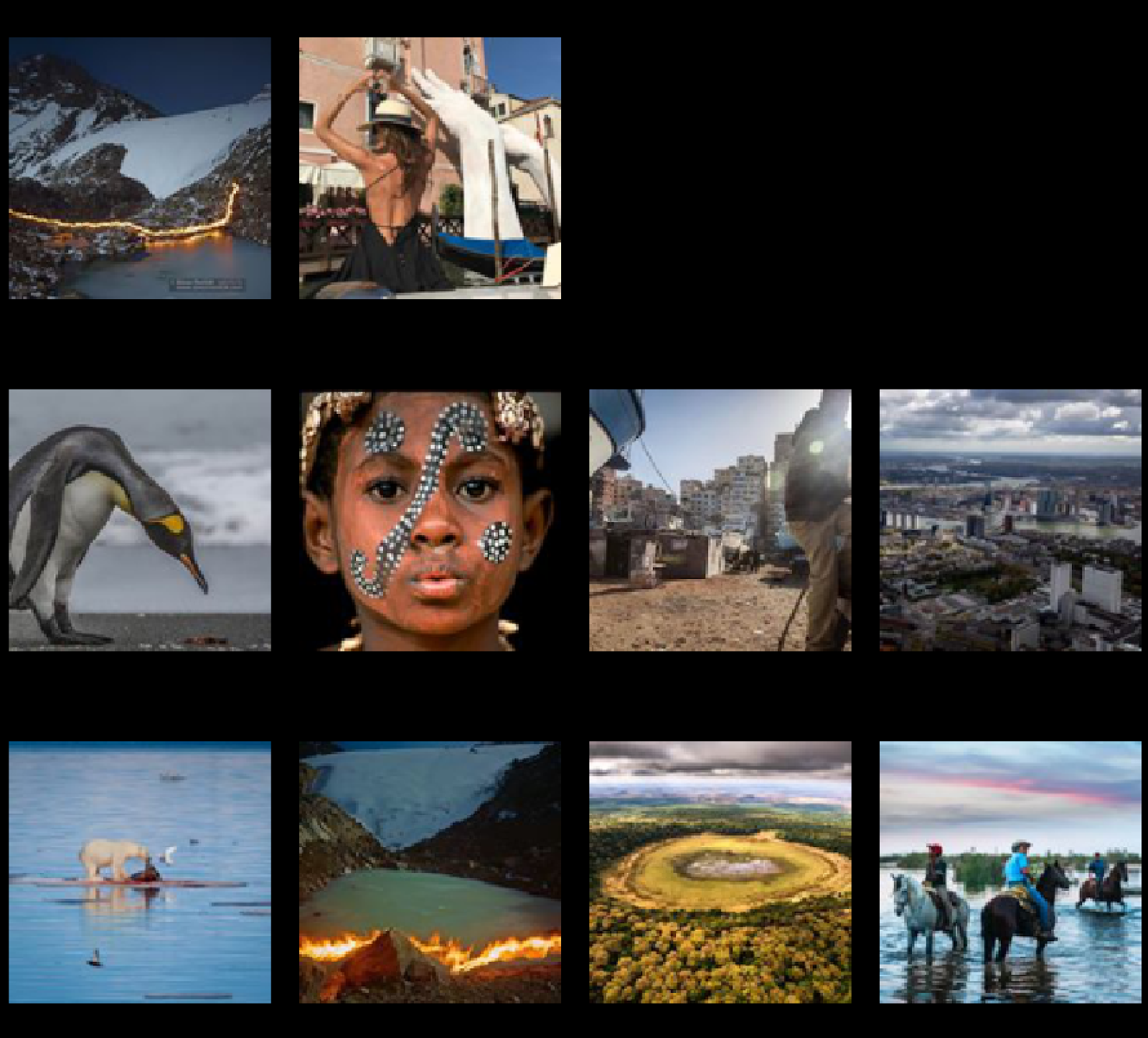 National Geographic (represented by both the @natgeo and @natgeotravel accounts) dominates the most popular images on Instagram both in striking artistic landscapes and in human interest style-photographs of the actual and potential victims of climate change. Concretely, both the first and second most engaged with image were posts on the natgeo account that documented a striking art project @simonnorfolkstudio. This work visualizes receding glaciers by marking the previous dimensions of the glaciers with lines of fire in contrast to its current state. The photographs involve high light contrast, rich dark colors, and dramatic mountain landscapes. Similarly, @natgeotravel included a professional and artistic landscape photograph by one of their in-house photographers @pedromcbride . This image captures a drying lake and is also marked by rich colors that aesthetically suggest the changing shape of the landscape with the passage of time and warming of the planet.

The other main category of image that National Geographic posted and was highly engaged with focused on potential and real human victims of climate change. For example, the fourth most engaged with image overall is a close up of a guinean child with face paint, tapping into the exotic human interest imagery the magazine has been typically known for. There is nothing explicit in this image that would suggest its relation to climate change, so a lengthy caption does that narrative linking work. Other such human interest images come from the natgeotravel account, but from a slightly more zoomed out and contextually rich perspective. One of these highlights cowboys marked as Latino on horseback celebrating the return of the long dry Rio Colorado.

@natgeotravel also includes one more stereotypical image of climate change (that ubiquitous polar bear!) that is part of this highly engaged with selection. It is a celebration of the animal in it’s natural habitat feeding on a seal. It is somewhat graphic because it shows the seal being ripped apart but is not a shocking or graphic representation of the starving or struggling bear as a result of climate change. Beyond this monopoly on engaging images, Leonardo DiCaprio ’s account is responsible for 3 of the most engaged with images. One is a an aerial photograph of rotterdam with the text referring to meeting on climate change taking place there. Another high resolution profession close up of a penguin fits into the more stereotypical view, along with natgeotravel’s polar bear. Like the national geographic photographs DiCaprio displays the photographers @CristinaMittermeier account at the beginning of this post in addition to the fact it’s a #regram from @world_wildlife. His last photograph also follows the pattern of national geographic by portraying the potential (still exotic and othered) human victims of climate change with a photograph of a populated coastal city in Egypt.

interesting, across all of these genres, both of national geographic's accounts are sure to mention the instagram of the photographer responsible for the image.

The tenth most engaged with image by the influencer/model @izabelgoulart stands as somewhat of an outlier in this group. It is perhaps similar to the most engaged with image because it also includes an artwork that explicitly critiques climate change. The sculpture and its author @lorenzoquinnartist is listed in the caption. However is not the center but the margin of the photograph, overshadowed by the model’s bare back and her own hands uplifted in the shape of a heart.

Top ten most engaged images from each clusters

After reading the ten pictures with most engagement (number of likes and number of comments combined) per cluster we sorted the results by color using the Image Sorter V4 Tool.

First we sorted the top ten images per cluster to manually code, what kind of colors and styles images are using most often in a cluster. Afterwards we did the same procedure with the general top ten most engaged pictures, also the top ten engaging pictures over all images not regarding clusters, and then combining all the clusters with / without the general top ten most engaging images. Some of these sortings led us to interesting findings, others were not very spectacular and we were not able to see specific schemes or languages used in the pictures.

Two other very interesting clusters were nature and environment. They both contain some of the same pictures in their top ten. The cluster nature does not contain memes or anything similar but mainly very professional pictures of nature. Environment does contain mainly pictures of nature but also memes using the language of the image to motivate people to do their part in regard of preventing climate change. The pictures of nature are aesthetically appealing but give you no connection to climate change only by looking at the pictures. They are mainly taken by travel or landscape photographers and then used by other accounts, giving credit to the original photographers, in combination with a caption that is related to climate change. The images are edited dark, greenish or blueish, appearing very sublime and mighty. None of the pictures actually show negative content like flooded houses and streets or other impacts of climate change. We assume, that the users of Instagram prefer aesthetically appealing content that makes you think and tries to motivate to keep the planets beauty with captions containing tips or facts about climate change and global warming rather than shocking images that leave you with a really bad aftertaste.

The cluster america consists of lots of memes and similar pictures that are not really related with climate change. Also the caption of many of them do not relate to this topic. It is the combination of all the hashtags used that make the pictures appear within the topic anyway. Surprising was, that nine of the top ten america posts are related with climate change. The images themselves already give you a good hint that they are speaking about this topic. It is the only cluster that has negative content in their top ten engaged images. As a result we received the image of a semi-dry lake as well as a starving polar bear but also more motivation, engaging posts of bloggers, influencers or organisations.

In the cluster art we find, as expected, a lot of posts of art pieces. The images show amongst others sculptures of climate change related illustrations in public or paintings. Lots of posts can be related to climate change without reading the caption. Surprising was, that the top ten images do not contain one single art piece like an art illustration or painting. The top ten images are professionally shot images of animals that are threatened with extinction or that were being killed in a national park. Although the posts are about the loss of killed animals, the pictures are not showing any kind of negative content.

The vegan cluster contains images of all types but mostly images with the use of text. This group of top ten engaged images is the only one containing images using statistical facts explaining the influence of eating meat on climate change.

Coding the clusters savetheplanet, repost, heatwave, philippines, climatecamp, world and waterislife did not provide any extraordinary findings or similarities.

In conclusion we can say that the analysis with ImageSorter showed us, that aesthetically appealing images are more engaging on Instagram than memes or textual pictures. Using this kind of language might be a rather decisive difference from other platforms as Facebook or reddit. Also typical stock photos of polar bears or other representing animals / sceneries from Getty Images i.e. barely seen on Instagram, they are replaced by professionally taken pictures of photographers. Their aim is not to make climate change visual but to focus and landscape photography as a way of cherishing and celebrating existing nature. Regarding the pictured landscapes, the engagement is particularly high on lush scenes, images with forests, oceans or lakes rather than the arctic.

All images of the different ImageSorter collages can be found in the following Google Drive folder: https://drive.google.com/open?id=0B4xAvTIBxLlfRjB2X2hUYXp2Vm8

We conclude that only with analyzing the top ten engaged posts it is not possible to state a final conclusion. It relates too much on the engagement and minimizes the diverse array of ways climate change is visualized, especially when in conjunction with artistic tags. Therefore to follow up, it would be necessary to analyze different perspectives as well. During our work we defined, besides the engagement, also the three other perspectives user perspective, coding of the images and filter. It must be said, that the filter perspective might not be very relevant because it cannot be compared to other platforms.

We started coding some clusters both manually and using MemeSpector, based on the Google Vision API. The comparison of the manual coding can be found in the general overview of all platforms. We did not have started analyzing the automatically coded images yet, but the results using MemeSpector can be found in the Instagram/Reddit / Instagram / MemeSpector folder. This data will enable us to follow the above-suggested research directions that can help shift the emphasis away from the top ten and provide a holistic sense of the platform vernaculars developed in each of the clusters.