Describe how visual communication about climate change adopts a platform vernacular in Tumblr.

To collect data from the blogging platform Tumblr we used the open access TumblrTool developed by the Digital Methods Initiative. The tool uses the Tumblr API to retrieve posts tagged with a specific term. In this case we queried the term “climate change” over the last year, running individual queries for each month (starting with 27/06/2016-26/07/2016, etc.). The overall range of the dataset is 27/06/2016-26/06/2017. We retrieved results in two forms: tabular files containing basic descriptions of the retrieved posts (e.g. user name, URL of the image, etc.); and co-tag files to analyze the network with Gephi.

The search strings returned various types of posts, featuring text, quotes, links, videos and/or images. We filtered the results to keep only posts with images since our research focusses on the visual depiction of climate change.

We ranked the 12 individual datasets to identify the 10 posts that received the most engagement on the platform over each monthly period. Engagement hereby refers to both “likes” and “re-blogs”. In a subsequent step, we identified the top 10 posts of the past year. Using the DownThemAll Firefox Module, we downloaded these images for further processing.

The TumblrTool has a limitation that is relevant for our research: it retrieves only the URL of the first image in a post, even when the post is constituted by several images. We addressed this limitation by manually downloading the additional images featured in the top 10 posts so as to include them in the analysis.

The median number of posts containing the tag “climate change” each month is 1,578 with a maximum of 3,169 posts between May 27-June 26 2017 and a minimum of 1,125 from June 27-July 26 2016. The share of posts with images is relatively constant over the months, ranging from 16% to 28% with a median value of 21%. The relatively small share of posts with images was a somewhat surprising finding, since Tumblr appears as a very visual platform. It should however be noted that videos, which we did not analyze, increase the share of visual elements on Tumblr.

The level of engagement with the posts we retained for analysis (that is, those containing images) varied quite drastically, even among the top 10 of each month. In June 2017 for example, the first ranking picture had 33,822 counts while the 10th only received 6,403 likes and re-blogs. The same holds true for the top 10 over the entire year where the first ranked post had 190,126 counts while the 10th had 39,426 (see table 1).

An examination of the top 10 most engaged with posts of each month and over the entire past year shows that most of the images are screenshots from other social media platforms, with Twitter being the most prominent source. In addition, three of the yearly top 10 posts feature memes; whereby one is a political meme (a GIF showing Hillary Clinton & Donald Trump) and the others depict “Bill Nye, The Science Guy”, a prominent pop culture figure of the science entertainment field.

It is apparent that while captions are very frequently used, titles are rare. The captions are added by the Tumblr users and underline, respectively convey, the message of the post. Even more than with other types of posts, captions are essential to convey the specific message associated with memes since it can vary significantly over time and across discourse spaces. Fig. 1 illustrates this well: the image shows Bill Nye running and is fairly cryptic. It is only the caption, which reads “when the president doesnt believe in climate change so u gotta make your own netflix series to educate everyone” (sic), that conveys the author’s message. 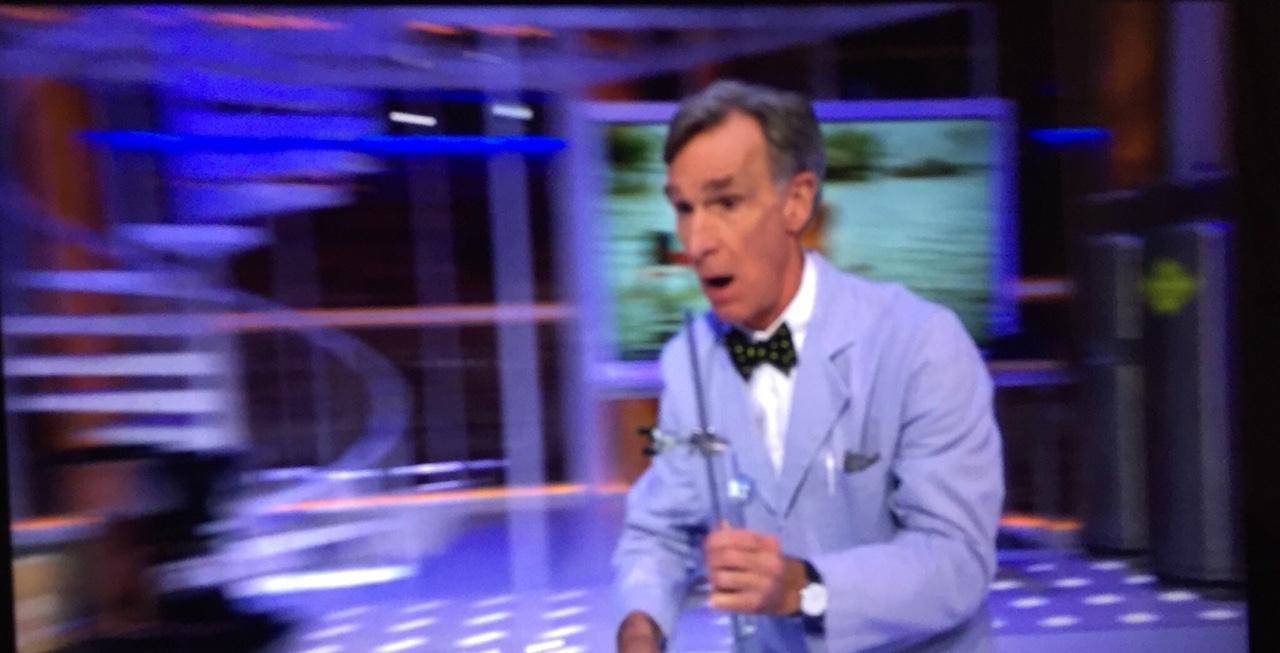 Figure 1 Tumblr post featuring meme of Bill Nye Further, it is noticeable that all top 10 posts related to either science or politics, or both (e.g. a post lamenting the political decision to cut funding for research). None of them denoted climate skepticism, on the contrary, numerous Tumblr posts are mocking skeptics (see Fig. 2) or shaming policy decisions deemed detrimental for the environment.

While most posts were constituted by only one image, a number of them were collages of several images. Among these collages some were screenshots of “Twitter conversations”, that is of an original Tweet and the comments it received (see Fig. 2). In other occasions Tumblr users assembled screenshots of initially unrelated Tweets to create a new storyline. This denotes a high creative engagement of the users with the content of the posts. Fig. 3 for example shows a collage by Mic.com of a GIF in which Donald Trump declares never to have said he thinks “climate change is a hoax” and three separate Tweets which prove otherwise.

In a last step we performed a co-tag network analysis to identify clusters of tags used in Tumblr. Fig. 4 shows that there are a number of distinct clusters. Aside from clusters on “politics”, “activism”, “nature” or “ecology”, there are some more surprising clusters related to “art”, “religion” or “interior design” which indicate a certain degree of tag hijacking. Fig. 5 further depicts the association of tags and images. The excerpt illustrates the prominence of Twitter screenshots and images of political actors. Indeed, Donald Trump appears multiple times and other images show Barack Obama and Emanuel Macron. 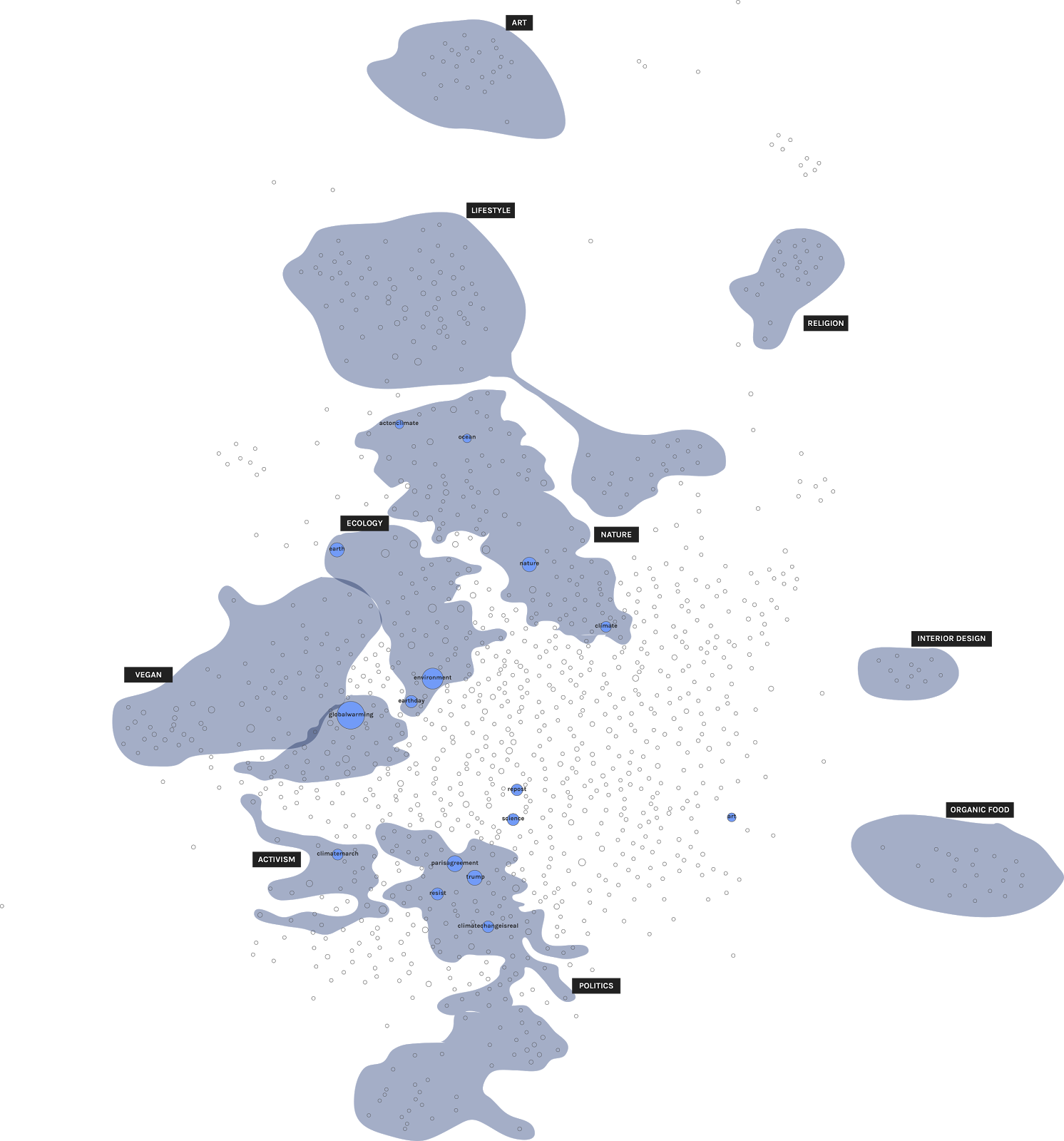 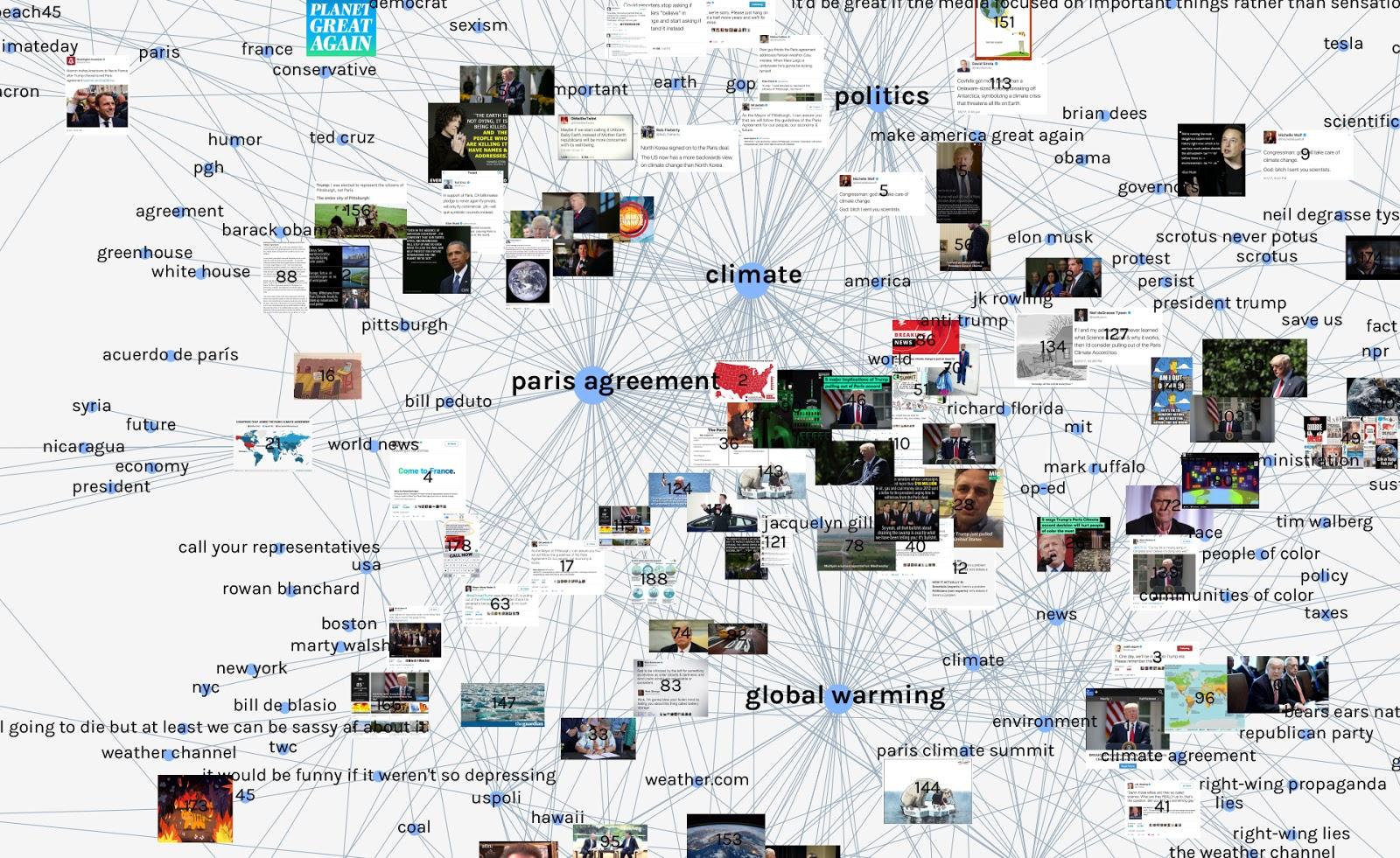 In conclusion, we denote a distinct visual mirroring of other social media platforms on Tumblr. Especially apparent is the migration of content from Twitter. Other characteristics of the platform are the prevalent use of humor and the need to view images in their native context, which includes captions that are essential to understand the intended meaning of the visual element.