As smart cities have risen up around the world, the implementation of technological infrastructures and big data tracking systems has not been seamless. Each new smart city comes with a distinct set of challenges and concerns, whether that includes surveillance, cybersecurity, transit conflicts, or displacement and gentrification. Moreover, these critiques and controversies happen in many different spaces and levels of discourse.

In order to derive an understanding of the sentiment, character, and geographical distribution of smart city critical discourse, we chose to analyze three specific platforms using a combination of digital methods to build query lists and visualize location-based data: Google, Twitter, and Amazon. Our hypothesis was that these three platforms would return distinct discursive spaces for news media (Google), user generated media (Twitter), and scholarly criticism (Amazon). This study pertains specifically to a platform analysis that cannot necessarily be extrapolated as a study of global discourse as a whole, especially because an analysis of Google and Twitter will exclude discourse from certain countries like China.

What is the relationship between different platforms and their capacity to facilitate critical discourse of smart cities? 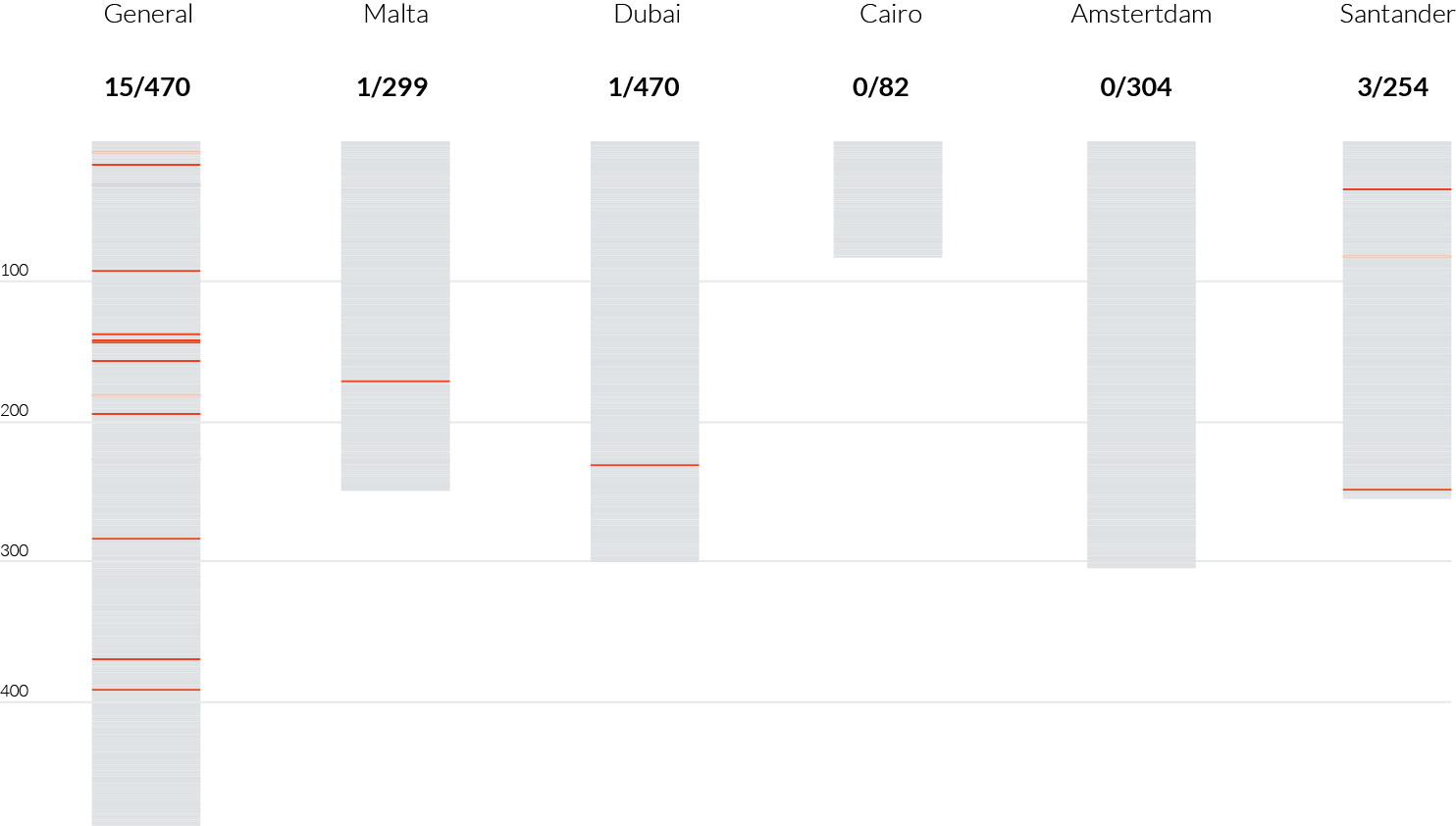 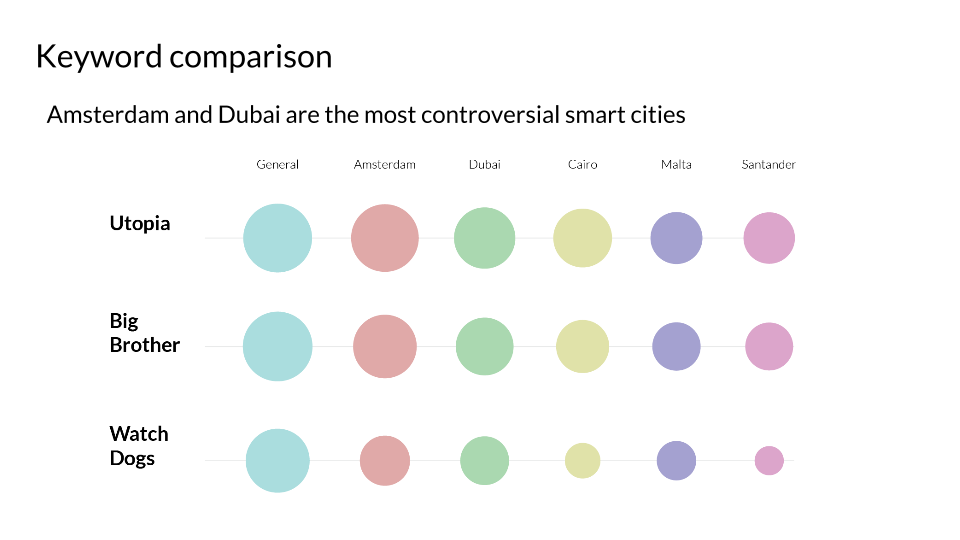 Geographically, the general buzz or overall discourse on smart cities is primarily situated within Europe and North America, although we acknowledge that our study is not accurate for Asia, as certain countries like China do not use Google. Controversy largely follows suit, but is particularly concentrated in India, Singapore, the United States, Netherlands, and the UK.

Within Google, the top critical keywords as retrieved from Issue Discovery are big brother, utopia, and watch dogs, taking on a distinct surveillance and privacy slant. Our initial analysis of these keywords within local Google domains showed us that there are far more conceptual, non-location specific controversy over smart cities than there are localized critiques of specific cities as smart cities. Our comparison with the .com results revealed that there are more global critiques of the five smart city case studies than there are internal critiques of the smart city within the cities themselves.

2. Grab the asin codes from the URLs of the books

3. Run a Amazon Recommendations (1 level) with the ASIN codes.

4. Visualize the network with Gephi: 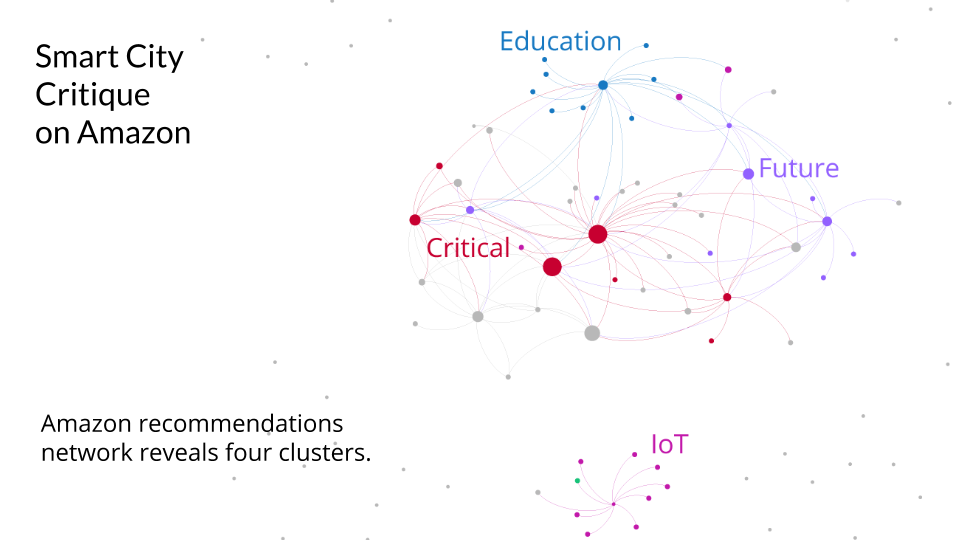 On the Amazon Recommendations graph, four clusters appear: one around education, one in which the future is central in the title, one central cluster that encompasses the more critical titles, and one separate cluster on the Internet of Things, which we assume results from algorithm settings. 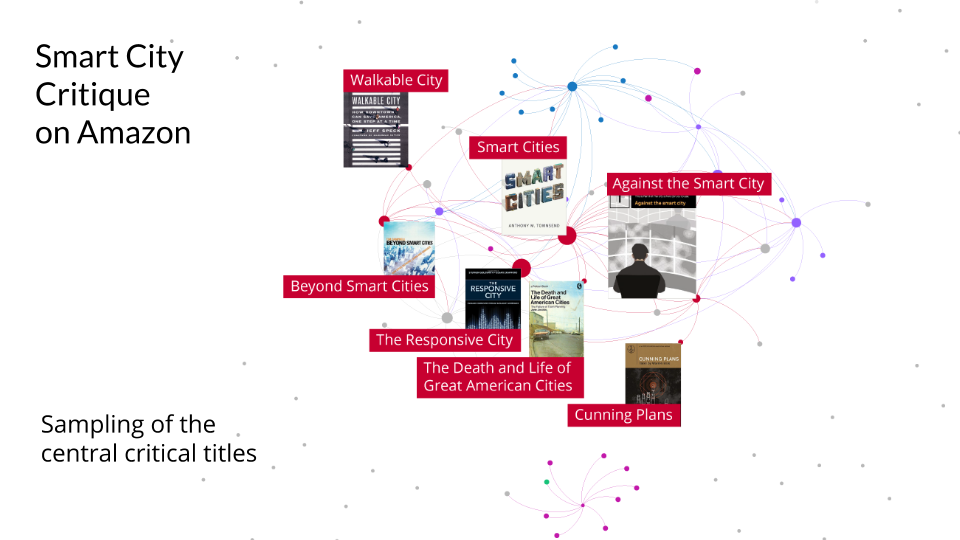 Our focus is on the central cluster, where Townsends Smart Cities: Big Data, Civic Hackers, and the Quest for a New Utopia has the highest degree of out-going recommendations. The most critical recommendation is Greenfields Against the smart city, which in turn recommends CUNNING PLANS: Talks By Warren Ellis, which is interesting as Warren Ellis is a science-fiction writer.

In the centre, we also see a recommendation to a seminal title on urban planning: The Death and Life of Great American Cities by Jane Jacobs is regarded as a must-read on city planning. The other titles show alternative or extended approaches to Smart Cities, in that respect criticizing the monocultural corpo-technocratic approach around data and efficiency.

From the graph it is clear that two critical titles form a recommendations hub, leading to other critical titles and other Smart City books alike. From this observation one can conclude that critical discourse is alive on Amazon.

1. Take a random sample of 1000 tweets from the smart cities TCAT dataset

2. Distinguish tweets that signify buzz from controversy 3. Plot datasets for buzz and for controversy on a map

4. Make a word cloud of the most frequently used terms for the critical dataset. 5. Using the top terms from the word cloud, do another query on TCAT and output as a co-hashtag network on Gephi to see the organization of the discourse. 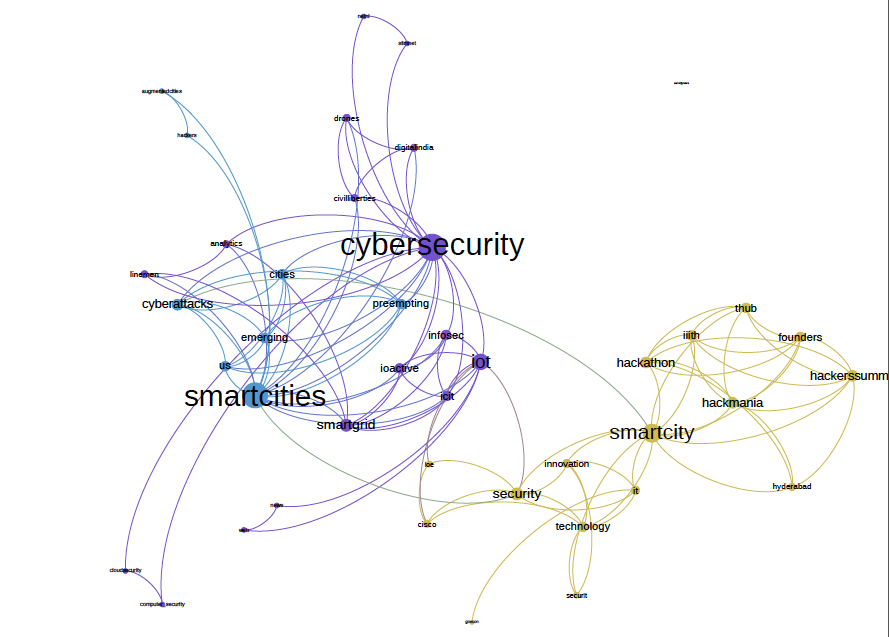 Compared to Google, Twitter facilitates the emergence of instances of critique more frequently and with wider geographical spread. However, there are limitations to the studys capacity to show critique of smart cities as terms such as hackers can refer to cyberterrorism, DIY communities, or IT entrepreneurs and government collaborators. Further study is necessary to deal with this ambiguity.

Google mostly facilitates or hosts critique in the global domain (.com) more so than in local ones. Likewise, the discourse constitutes a general critique rather than a localized critique of particular smart cities. Critique follows the buzz, as both occur in the same areas. A shortcoming of our study is the reliance on Google and exclusion of engines that are popular in other parts of the world.

Amazon facilitates clear ideological positioning, again in a more general sense. Further study is necessary to determine to what extent critique is localized through for instance the presence of smart city critiques in local languages rather than translations.

Twitter generates instances of postings with a wider geographical spread compared to Google. However more postings are ambiguous rather than either clearly critical or buzz-like. The co-hashtag analysis including terms related to hacking shows its iteration in postings about security, innovation, and DIY. Last, it is interesting to note that the discursive focus on Twitter is distinct from the focus on Google: awareness and citizen participation (among the frequently occurring terms were: citizens, unaware, council, local) versus privacy (big brother).

All in all, these three platforms have different affordances and the critique they generate takes up different forms.