Why do people walk on Cultural Routes?

European Cultural Routes are those itineraries based on a historic route conveying a transnational importance and significance for the understanding and respect of common European values. Since 1987, an official Programme established by the Council of Europe protects them (http://culture-routes.net/). These routes are expected to strengthen the democratic dimension of cultural exchange and tourism through the involvement of grassroots networks and associations, local and regional authorities, universities and professional organisations. Yet, until now, there are very few empirical studies that have analysed the motivation of walkers and their engagement.

This project studies the Via Francigena, a 1800 km itinerary stretching from Canterbury to Rome across Italy, Switzerland, France and UK, taken by more than 50,000 pilgrims in 2014. A rich corpus of social media data is available: tweets containing “francigena”, instagram posts containing “francigena” and related Facebook pages and groups’ contents.

The project aims at investigating the discursive facet of Via Francigena on social media focusing on:

(1) How places along the Francigena are represented and perceived;

(2) Who are the people talking about Francigena on social media.

Studies on cultural routes have only developed very recently. Several studies investigated a specific itinerary or only part of it from a disciplinary perspective (historical, religious, geographic), yet only a few of recent analyses have considered cultural routes as a transdisciplinary object. These analyses are generally based on the concept of cultural landscape, focusing on touristic and management issues. Conversely, studies considering social aspects related to cultural routes and notably the type of engagement of walkers are very limited.

Based on some recent surveys, it is considered that:

Based on social media activity, who are the people walking on Via Francigena ?

Based on social media activity, why do people walk on cultural routes?

According to the state of art and previous statistics, engagement can be based on:

Based on social media activity, how people interact with places along the VF? Do we have different type of engagement on different places? We can make the hypothesis that more people are close to rome more their engagement is spiritual/religious?

We compared uses of Twitter and Instagram along the route to see how people, places and engagement are represented on the cultural route. The two platforms gave very different results.

In Twitter we analysed tweets during the last two months from 11-11-2015 to 08-01-2016 (ab. 2000 tweets). In Instagram we focus on the last 400 posted photos, even if for analysis of places we took a larger sample by considering all geotagged pictures between 2012 and today. We studied the following aspects:

Which users are more active? which is the identity of walkers on social media?

Methods: we consider the 50 more active users on Instagram and on Facebook and we classified them for: sex and age. 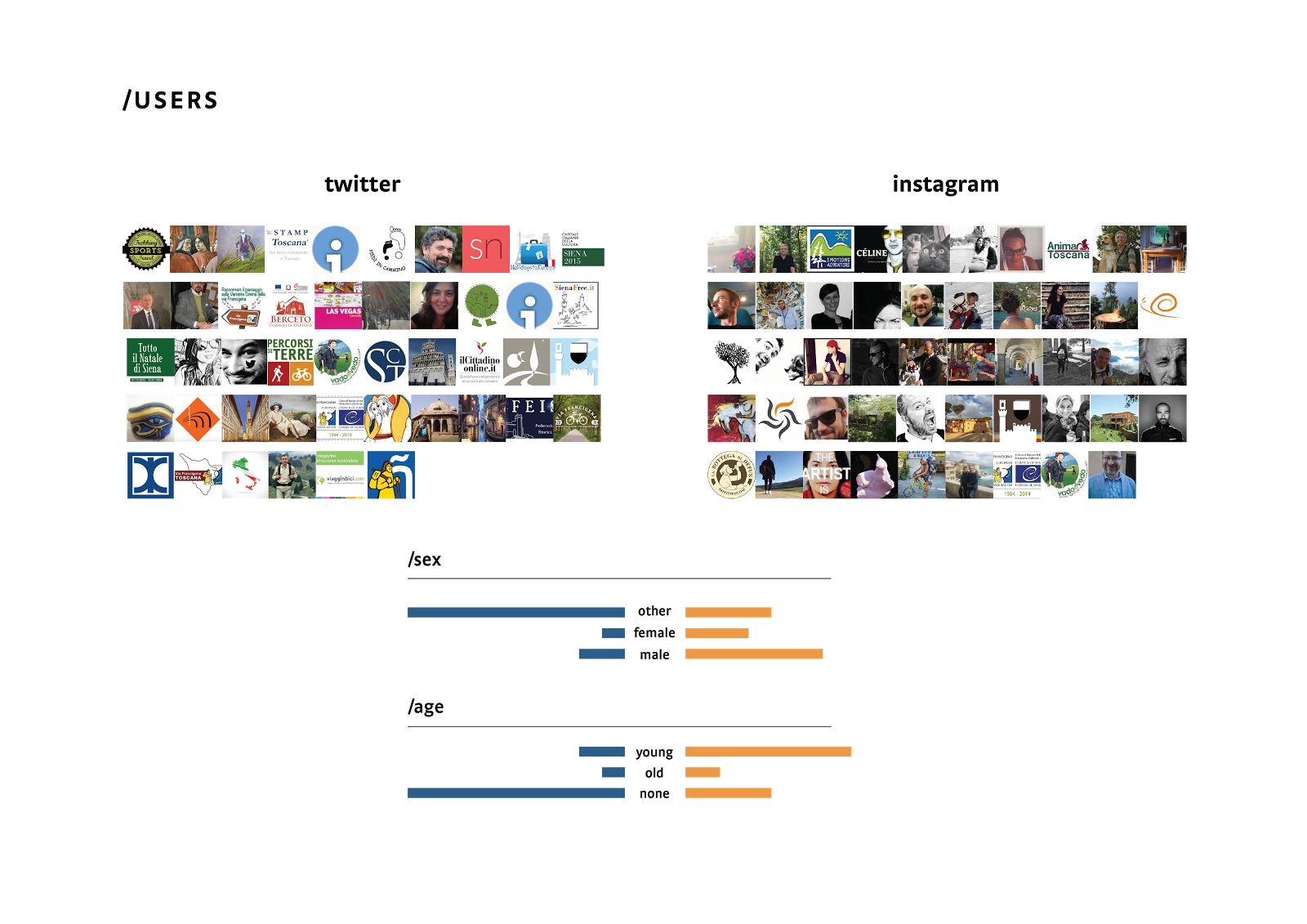 Why do people walk on Via Francigena?

Methods: we consider the different content published on social media and we classified it for different type of engagement: nature, culture, religion, people, food.

We considered most frequent hashtags # and words in the sample. 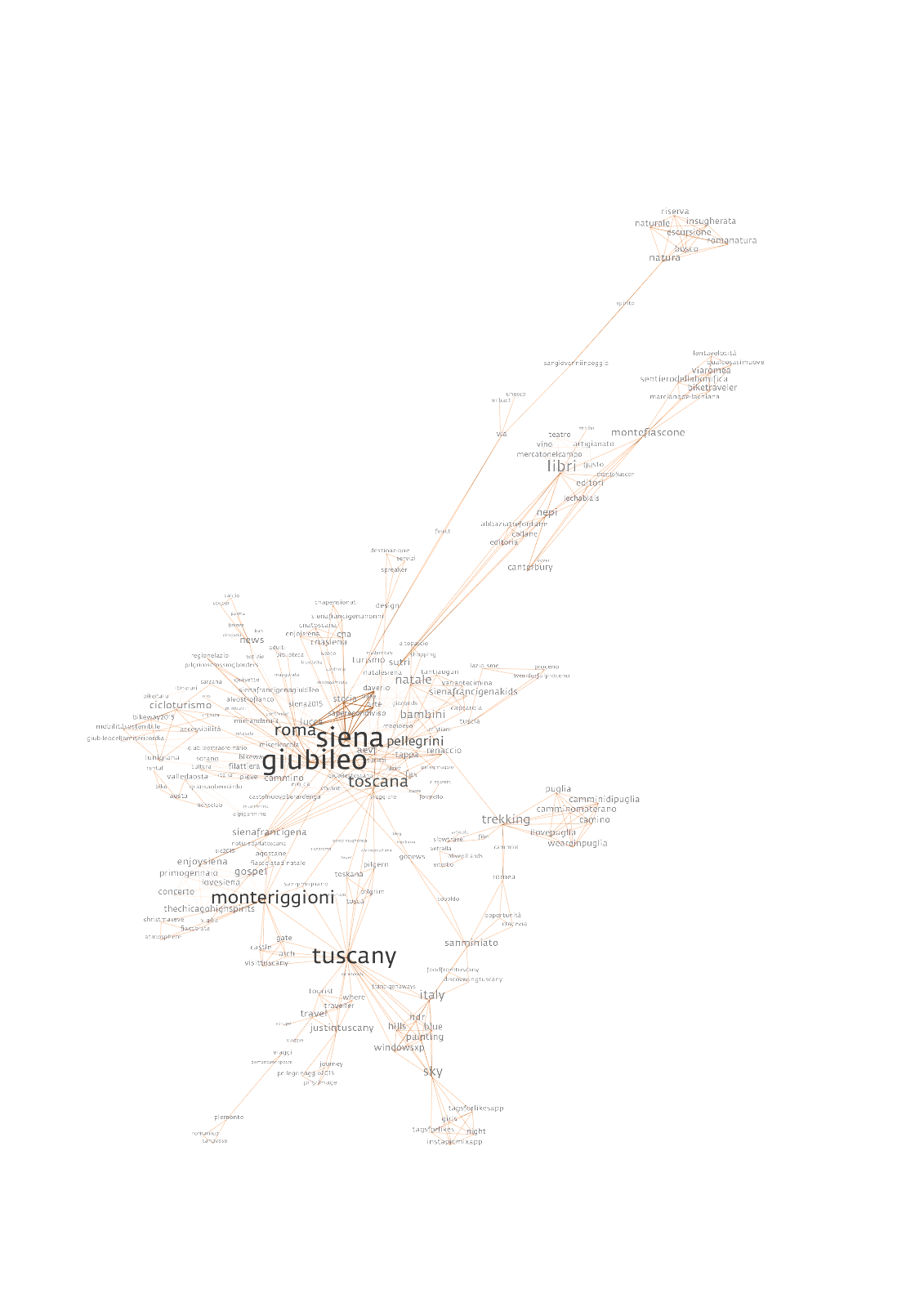 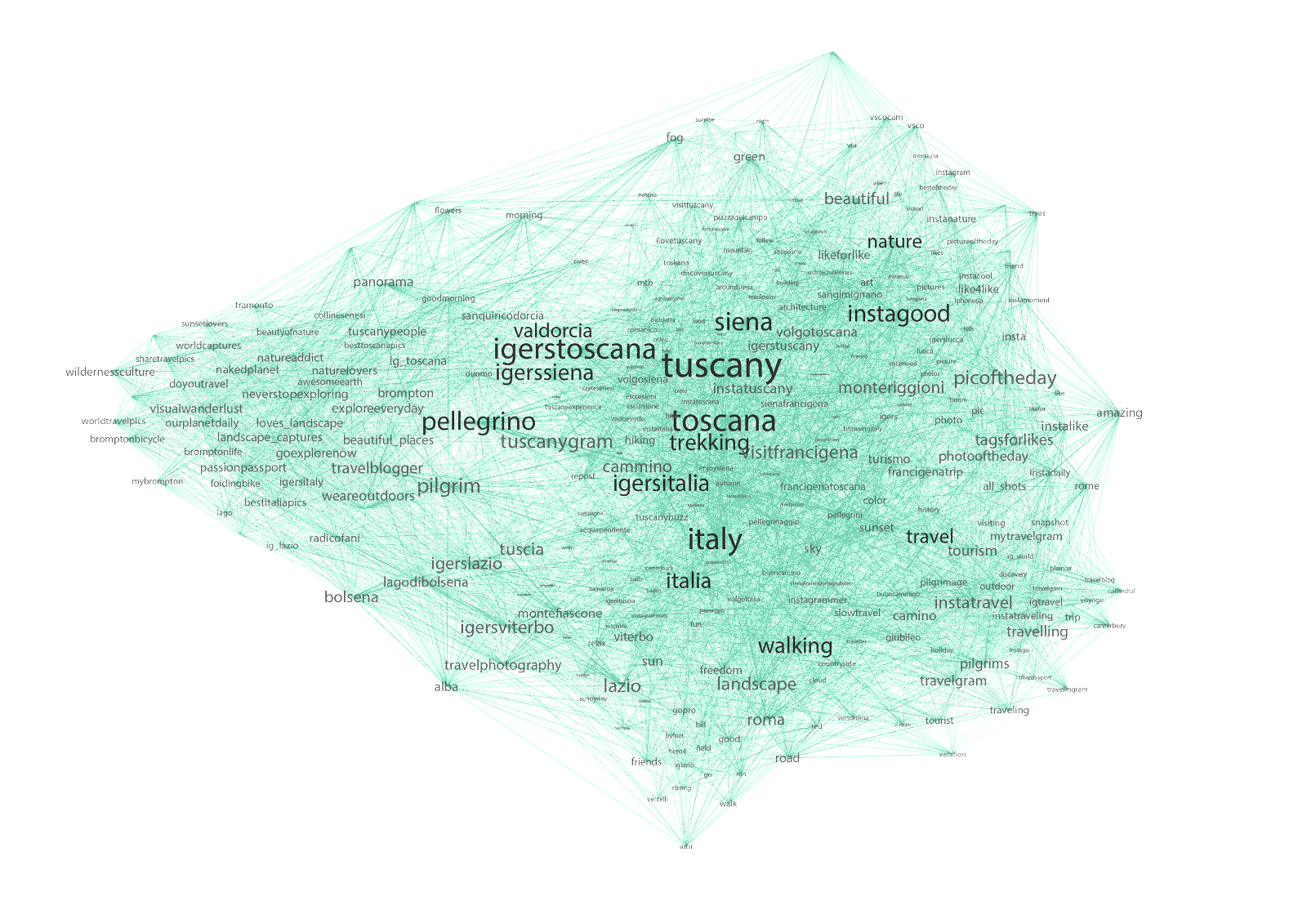 Almost half of photo are related to nature and landscape (48,5%), then an important part of photos represents people, mainly selfie (24,5%) and also cultural elements (19,5%). Only few photos are dedicated to food (4,5%). The smallest category is “religion” (3%).

Religious pictures could not be shared because is not “cool”. Social media require some kind of logics, uses and pictures. 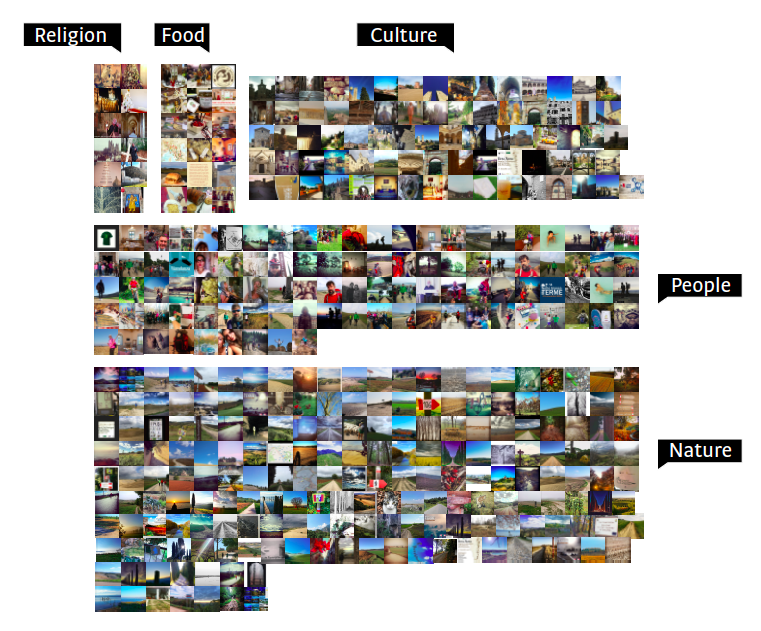 How are the interactions between people and places? Are there different types of engagement in different places?

Methods: we consider the distribution of geotagged photos along the trail published in Instagram. We consider 90 main stops along the Via Francigena.

In order to do this, we try to reproduce the method of the Tabula Peutingeriana :

"The table appears to be based on "itineraries", lists of destinations along Roman roads, as the distances between points along the routes are indicated. [9] Travelers would not have possessed anything so sophisticated as a modern map, but they needed to know what lay ahead of them on the road and how far. The Peutinger table represents these roads as a series of stepped lines along which destinations have been marked in order of travel." (Wikipedia)

(1) Who are the people talking about Francigena on social media:

> Different types of engagement (not only religion)

(2) How places along the Francigena are represented and perceived.